CHARLESTON, S.C. - Jan. 19, 2022 - PRLog -- Keynote Speaker Justin Myers recently announced a new speaking presentation that he is taking nationwide. Drawing from his experience in the military and as a successful businessman, this presentation focuses on the need to "master your craft" as you start to create powerful life achievement.

Justin started off as an exceptional student in the Taekwondo Junior Olympics and then the Dixie Youth World Series. As he grew older, he realized his calling to serve his country and joined the US Navy as a Gunner's Mate. In 2010, he made Navy history by directly capturing Somalian pirates leading to their conviction. His efforts while serving in a dangerous and constantly shifting environment were recognized by the Navy with numerous commendations. After military service, Justin started a sign company that quickly grew to nationwide fame. He branched out, going state to state and became a sought after keynote speaker.

"In life, you must always set out to master your craft. It's not enough to show up, you need to be a dynamic leader in all aspects." – Justin Myers, US Navy Gunner's Mate (ret.)

According to the U.S. Small Business Administration, veterans are 45% more likely to start their own business, and one out of 10 small businesses in the U.S. are veteran-owned, accounting for about 2.4 million businesses (military.com website, 2021).

To book Justin for your event, contact him at https://thepiratehunter.com/ 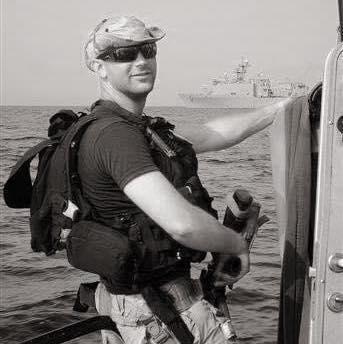