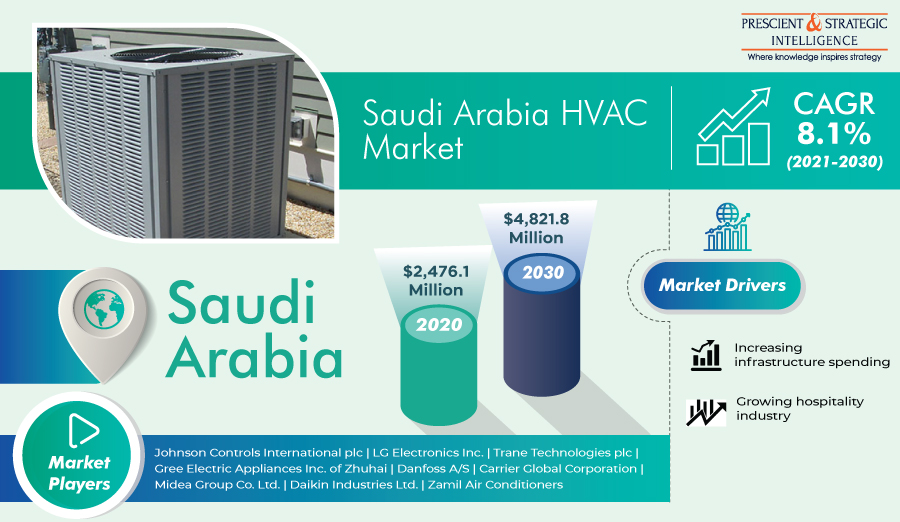 Western Saudi Arabia held the largest revenue share in the HVAC market in 2020. This was because of the major infrastructure development projects in the region and religious influence of the cities of Makkah and Madinah.

Until the 1930s, the Saudi economy had little to boast, with the major part of it made by subsistence living, wherein people rely on natural resources for their basic needs. But, since the development of oil fields in 1933, Saudi has become one of the most-important countries for the global economy, as it is the largest exporter of crude oil (petroleum). The kingdom’s financial prosperity, as a result, has sparked a construction boom here, which, in itself, is now a major engine of its economic growth.

As per P&S Intelligence, the rampant construction activities will likely take the Saudi Arabian HVAC market value from $2,476.1 million in 2020 to $4,821.8 million in 2030, at an 8.1% CAGR between 2021 and 2030. This is because, occupying a major part of the Arabian Desert, the kingdom witnesses perpetually hot and dry weather, which makes air conditioning important. Earlier ventilated by traditional wind catchers, Saudi buildings are now being equipped with modern HVAC systems.

With the rapid economic growth, cities are expanding, which is leading to the increasing infrastructure spending to sustain the booming urban population. For instance, $23 billion are being spent to construct Riyadh Metro, which will have six lines and 85 stations. Similarly, Jeddah Metro will have 46 stations across three lines. HVAC systems are one of the biggest requirements at metro stations, underground tunnels, and inside the trains, which is why the demand for such systems is rising in the kingdom.

Get the sample pages of this report at: https://www.psmarketresearch.com/market-analysis/saudi-arabia-hvac-market/report-sample

In the same way, Vox Cinemas, which opened its first movie theatre in the kingdom in May 2019, is planning to have 600 screens in Saudi Arabia by 2023, investing $500 for this expansion. Essentially closed spaces, theatres and other such venues have multiple HVAC systems. Moreover, the first phase of the $500-billion NEOM City was completed that year, which saw massive HVAC sales for a differentiated array of buildings. With more phases of the project taking shape, the demand for such equipment will increase further.

Similarly, with increasing business opportunities, the country’s hospitality sector is growing. The Middle East is already known for its luxurious lifestyle, and with Saudis becoming modern every year, many dazzling hotels and resorts are being constructed. The Intercontinental Hotel Group opened a 4,200-room hotel, while Radisson Hotel Group opened a 355-room hotel, its 43rd in the kingdom, in 2019. Moreover, Hilton Worldwide plans to open 35 hotels here in the next 2–3 years. Apart from business, the kingdom’s booming tourism industry, led by the holy sites of Mecca and Medina, is driving hotel construction here.

Another key sector that is propelling the Saudi Arabian heating, ventilation, and air conditioning market is district heating and cooling (DHC). It has been considered better to have a centralized heating and cooling system for a group of buildings than to have individual systems for every building. This is because DHC systems consume up to 50% less energy than individual HVAC units in individual buildings. With the mounting energy prices and widespread environmental concerns, the usage of DHC is rising here.

Moreover, HVAC systems are themselves becoming smart with the integration of automatic functions, connected sensors, and better controls. Moreover, ground-source HVAC systems, which use the heat contained within the ground to perform heating and cooling, are helping reduce the consumption of fossil fuels at power plants by requiring lesser electricity from the grid. To further boost this cause, solar-powered HVAC systems are becoming the trend in the kingdom. All such efforts can be credited, in part, to the Saudi Vision 2030, which aims to reduce the country’s dependence on the oil trade.

HVAC Services Market in United States - Geographically, the southern region accounted for the largest share in the U.S. HVAC services market in 2019, owing to the varying climatic conditions of the southern cities. Additionally, the accelerating urbanization rate in the region is also driving the demand for HVAC systems there.