The report "Space Situational Awareness Market by Solution (Services, Payload Systems, and Software), Orbital Range (Near-Earth and Deep Space), End Use (Commercial, and Government & Military), Object, Capability, and Region - Forecast to 2026", is projected to grow from USD 1.5 billion in 2021 to USD 1.8 billion by 2026, at a CAGR of 4.6%. Space situational awareness refers to the tracking and surveillance of objects in the earth’s orbit, monitoring space weather conditions, and tracking & detecting near-earth objects to mitigate or reduce the hazards of a collision. It also includes the monitoring of distinct activities carried out by different countries and object characterization, in terms of speed and type, to identify threats posed to the security of different nations. The growth of the space situational awareness market can be attributed to factors such as the growing congestion of objects in space and the focus of government agencies and private entities on space situational awareness. 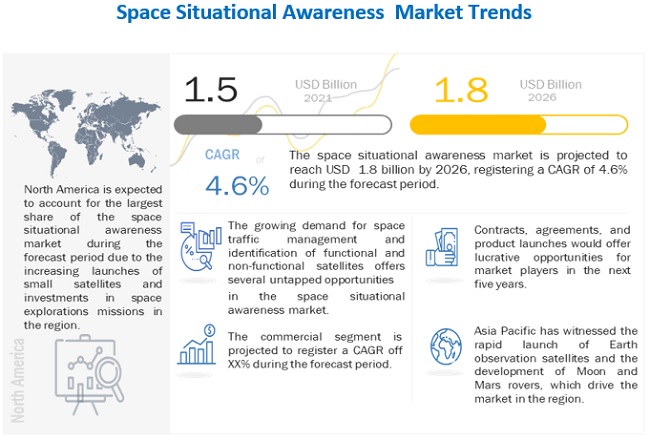 Growing investments by several governments particularly in developed and developing economies such as the US, India, and China, among others. COVID-19 has affected the Space situational awareness market growth to some extent, and this varies from country to country. Industry experts believe that the pandemic has not affected the demand for Space situational awareness.

Based on solution, service segment is estimated to witness the largest share of the space situational awareness market from 2021 to 2026.

Based on solution, the services segment of the space situational awareness market is estimated to held the dominant market share in 2021. This is due to the increasing need for expansion of space weather services networks with additional capabilities, development of SSA tools, and the need for space surveillance and tracking for smooth functioning of satellites. In July 2021, the Space Weather Prediction Center (US) added the WAM-IPE, its newest model, to the Space Weather Prediction Center’s toolkit. This new model is focused on the part of the Earth’s atmosphere where many US satellites are in orbit and could be vulnerable to energy from the sun. In July 2021, the US Space Force Service is pursuing a deep space advanced radar concept program, also known as DARC. According to the service, the platform is a ground-based radar system designed to detect, track, and maintain custody of deep space objects 24/7. It will primarily track objects in the geosynchronous-Earth orbit, though it could also track objects in low-Earth orbit. DARC will augment the military’s space surveillance network as an additional sensor with increased capacity and capability to monitor deep space objects and provide full global coverage.

Based on orbital range, near-Earth segment of the space situational awareness market is projected to witness the largest share in 2021.

Based on orbital range, the near-Earth segment is projected to lead the space situational awareness market during the forecast period. The growing demand for high-speed, low-latency communication, and increased satellite and spacecraft launches in the low Earth orbit are primarily driving this segment. In March 2020, Russian built a Soyuz-2.1b carrier rocket equipped with a Fregat booster. It was launched successfully from the Plesetsk Cosmodrome carrying a Glonass-M navigational satellite into medium Earth orbit. In March 2021, an undisclosed commercial customer awarded a contract to Lockheed Martin to build and deliver a payload intended to ensure space domain knowledge. The payload, equipped with an optical sensor, will be used for object detection and image capture from geosynchronous Earth orbit in support of efforts to maintain space situational awareness.

Based on end use, commercial segment is estimated to account for the fastest growth of the space situational awareness market from 2021 to 2026.

Based on end use, the commercial segment of the space situational awareness market is projected to grow at the highest CAGR during the forecast period. This growth is driven by investments from private players in space research and satellite communication services, the need for real-time data on mission-related debris and space traffic assessment, and the need to monitor the structural integrity of nuclear power stations.

Based on region, North America is expected to lead the Space situational awareness market from 2021 to 2026. The US is a lucrative market for Space situational awareness in the North American region. The US government has taken various initiatives to encourage the growth of the space situational awareness market. For instance, space situational awareness programs conducted by the US government focus on intelligence, surveillance, reconnaissance, environmental monitoring, and command & control. Since the 1960s, the US military has had significant SSA capabilities, largely based on the backbone of missile warning radar. The original impetus was the need to track Soviet missiles, nuclear warheads, and space-based threats. In recent years, the US military’s operations have been more focused on protecting satellites. In May 2021, Parsons Corporation was awarded a task order contract by the Space and Missile Systems Center Special Programs Directorate (SMC/SPG) for Integrated Solution for Situational Awareness (ISSA) support, potentially worth up to USD 185 million. It will provide SMC/SPG and its strategic partners with highly specialized services in IT engineering, space domain expertise, software development, scientific analysis, and data analytics to develop, maintain, sustain, and enhance the ISSA system.

The Space situational awareness market is dominated by a few globally established players such as L3Harris Technologies (US), Lockheed Martin Corporation (US), Kratos Defense & Security Solutions, Inc. (US), Parsons Corporation (US), and Peraton (US), among others.

Our 850 fulltime analyst and SMEs at MarketsandMarkets™ are tracking global high growth markets following the "Growth Engagement Model – GEM". The GEM aims at proactive collaboration with the clients to identify new opportunities, identify most important customers, write "Attack, avoid and defend" strategies, identify sources of incremental revenues for both the company and its competitors. MarketsandMarkets™ now coming up with 1,500 MicroQuadrants (Positioning top players across leaders, emerging companies, innovators, strategic players) annually in high growth emerging segments. MarketsandMarkets™ is determined to benefit more than 10,000 companies this year for their revenue planning and help them take their innovations/disruptions early to the market by providing them research ahead of the curve.

MarketsandMarkets’s flagship competitive intelligence and market research platform, "Knowledgestore" connects over 200,000 markets and entire value chains for deeper understanding of the unmet insights along with market sizing and forecasts of niche markets.