Though it’s insulated from sea level rise, the state of Iowa faces many dangerous climate change impacts — which in turn threaten the nation’s food supply. Fortunately, the state is rich in renewable energy potential and eager advocates who hope to harness it.

For this episode of our Voices of 100% series of the Local Energy Rules Podcast, host John Farrell talks with Kari Carney and Josh Mandelbaum. Carney is the executive director of 1000 Friends of Iowa and Mandelbaum is a member of the Des Moines city council. The three discuss Des Moines’s round-the-clock clean electricity resolution, how it differs from traditional clean energy commitments, and the strategies Des Moines will use to reach its goal.

Listen to the full episode and explore more resources below — including a transcript and summary of the conversation.

Kari Carney is the Executive Director of 1000 Friends of Iowa, a non-profit organization “engaging local residents around responsible and equitable land use.” Part of responsible land use, says Carney, is considering its impact on the climate. Josh Mandelbaum, Senior Attorney at the Environmental Law & Policy Center, was elected to Des Moines City Council in 2017. Mandelbaum describes how he has already seen climate change impacts during his term on the council: flash flooding in 2018, a derecho storm in 2020, and a severe drought in 2021. 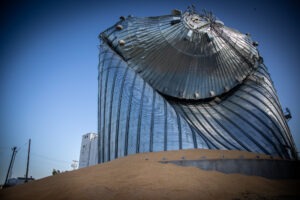 Damage from the derecho storm that swept Iowa 2020. Photo from Phil Roeder via Flickr (CC BY 2.0)

In 2021, Mandelbaum and his fellow council members unanimously passed a resolution for 100 percent clean electricity by 2035. Carney was among many advocates pushing for this resolution. The Des Moines resolution has one crucial clause: the electricity will come from renewable resources 24 hours a day, seven days a week.

On Earth Day of 2016, 1000 Friends of Iowa and others began lobbying for the creation of the Citizens Task Force on Sustainability. After meeting with members of the council and gaining the mayor’s support, the city approved the task force. Carney says that this step, and the grassroots mobilization and relationship building it took to accomplish it, got the ball rolling for the clean energy resolution.

There were a number of different things that we did, but really it was building that grassroots support and continuing to push the rest of the council.— Kari Carney

After Mandelbaum and others were elected to the city council in 2017, advocates pushed for what would become the 24/7 clean electricity resolution.

A new kind of city resolution

80 percent of Des Moines’s electricity, supplied by MidAmerican Energy, already comes from wind. However, MidAmerican greens some of its energy supply with renewable energy credits — which does not align with the Des Moines resolution. MidAmerican also, despite its 100% renewable energy vision, has no plans to retire its five coal plants. The city must therefore find a way to go above and beyond what the utility is willing to do.

I have confidence that we can innovate and that we can continue to push forward, but we’re going to have to be pushing the utility. They don’t necessarily want to do it on their own, but we also know that they’re capable of doing it.— Josh Mandelbaum

MidAmerican’s franchise agreement with Des Moines is up for renewal next year, says Mandelbaum, which gives the city some bargaining power.

The city’s first steps toward its goal have been benchmarking current energy and water use and hiring a sustainability director. Des Moines has also added solar to several new buildings, including a new fire station.

Energy Efficiency and Solar Offer an Avenue to Advance Equity

Both Carney and Mandelbaum emphasize the importance of energy efficiency in meeting Des Moines’s ambitious goal. Not only does energy efficiency have value in carbon reduction, but it makes electric bills more affordable and buildings more comfortable.

Energy efficiency is imperative for low-income residential customers, who face the greatest energy burden (portion of their income spent on energy). This is a challenge since these same customers might not be able to afford the upfront costs of efficiency upgrades. Inclusive financing, sometimes called Pay As You Save, is one solution to this challenge.

You can’t have affordable housing without energy efficiency.— Josh Mandelbaum

An inclusive financing framework can also be used to install solar power.

Leading the way for Iowa

Mandelbaum and Carney both describe cities and counties they have contacted or collaborated with. Since Des Moines makes up 10% of MidAmerican Energy’s customer base, says Mandelbaum, banding together with other MidAmerican customers will amplify the city’s voice.

Carney explains how other Iowa cities look to Des Moines as an example. She continues her outreach across the state, but accepts that Des Moines will pioneer the way for Iowa. Still, there are examples across the country that inspire Carney and other advocates — including the Minneapolis Clean Energy Partnership.

We know Des Moines is definitely the leader, but others are interested in doing it. They just don’t want to be the first.— Kari CarneyEpisode Notes

See these resources for more behind the story:

For concrete examples of how towns and cities can take action toward gaining more control over their clean energy future, explore ILSR’s Community Power Toolkit.

This is the 32nd episode of our special  Voices of series, and episode 142 of Local Energy Rules, an ILSR podcast with Energy Democracy Director John Farrell, which shares powerful stories of successful local renewable energy and exposes the policy and practical barriers to its expansion.