Is a Big Move in Store for Applied Materials Stock?

By: StockNews.com
Applied Materials (AMAT) has been trading in a wide sideways trading range where it has formed a level of support and a line of resistance. If the stock breaks through either level, a big move could be in store. Read more to learn how to profit from this trade.

Applied Materials (AMAT) is one of the world's largest suppliers of semiconductor manufacturing equipment, providing materials engineering solutions to help make nearly every chip in the world. The firm's systems are used in nearly every major process step with the exception of lithography.

The company is benefiting from strong momentum in Semiconductor Systems and Applied Global Services. Plus, AMAT is seeing strong demand for silicon in various applications across several markets. In addition, the growing usage of OLED technology in smartphones, TVs, and computers, should help support growth.

As of the end of the most recent quarter, the company had $6.5 billion in cash, which compares favorably to no short-term debt. As for growth, AMAT has shown strong earnings growth with earnings per share growing an average of 30.1% per year over the past five years. Analysts expect earnings to rise 56% year over year in the current quarter.

The stock also looks undervalued with a forward P/E of 17.42. AMAT has shown mixed performance since May, but has been trending up since early October as shown in the chart below. This has led to a Momentum Grade of B in our POWR Ratings system.

Take a look at the 1-year chart of AMAT below with added notations: 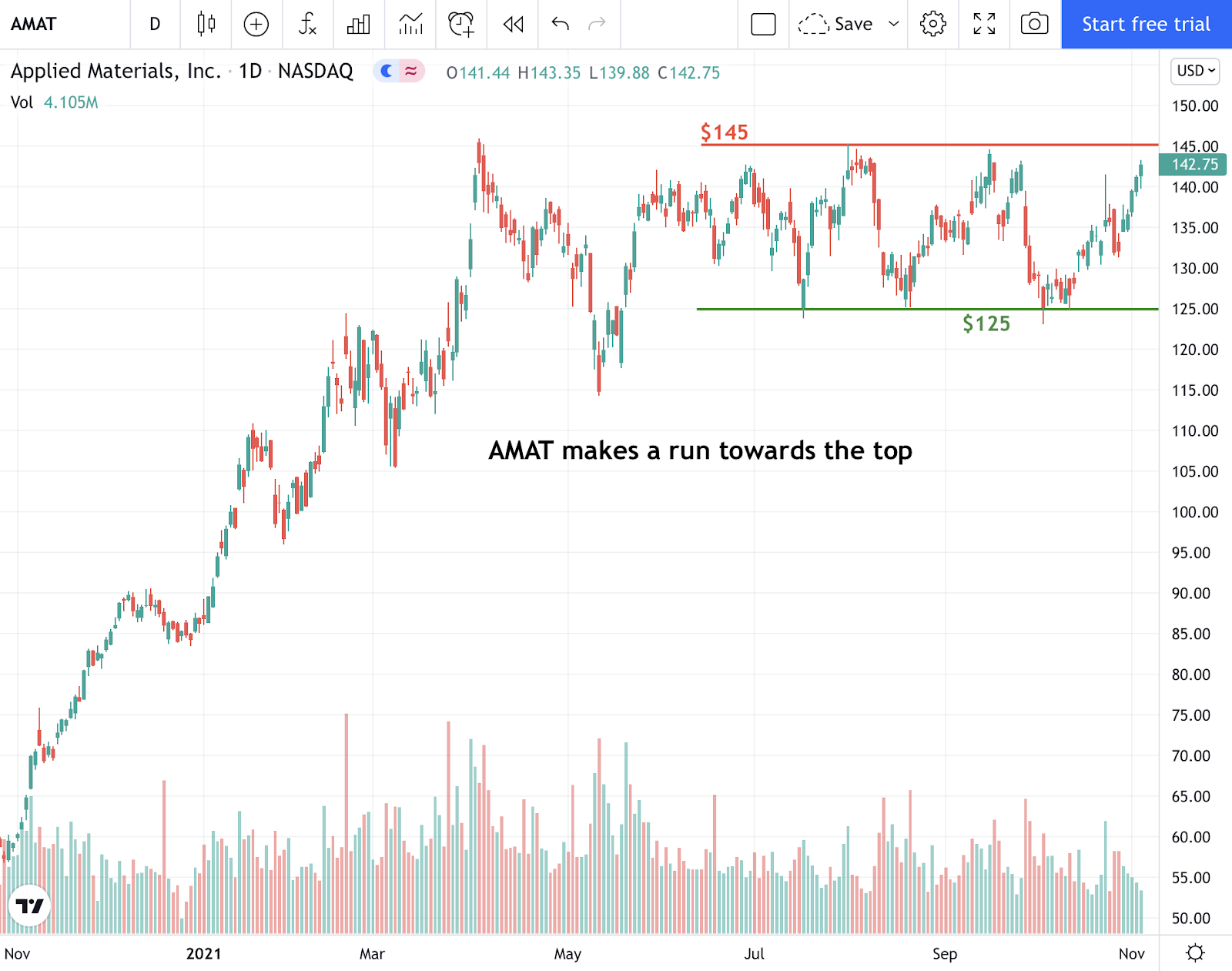 Chart of AMAT provided by TradingView

AMAT rallied into the spring of this year, eventually peaking in April. Since then, the stock has settled within a wide trading range between the $125 support (green) and a $145 resistance (red).

Click Here to Read the Greatest Trading Book Ever Written

At some stage, AMAT will break out of the range, and that break will likely dictate the stock’s next big move.  A long trade could be entered on a break above the $145 resistance level, with a protective stop set underneath the point of entry. An ideal short trade could be made on a break below support, with a protective stop place above the point of entry..

What is better than finding the 1 attractive stock in this article?

Discovering 5 timely trades...like the ones in this new special report. Click below to claim your free copy now!

About the Author: Christian Tharp

I am an expert stock market coach having helped over 4000 beginner and advanced traders & investors from around the world take control of their financial futures. I also write stock market related articles for the Adam Mesh Trading Group and Yolo Publishing.

The post Is a Big Move in Store for Applied Materials Stock? appeared first on StockNews.com
Data & News supplied by www.cloudquote.io
Stock quotes supplied by Barchart
Quotes delayed at least 20 minutes.
By accessing this page, you agree to the following
Privacy Policy and Terms and Conditions.