The future of Europe’s green energy landscape is deep underground

By: Green Power RSS Feed
Geothermal energy not only has a renewed exploration roadmap to follow, but a revived political landscape as well.

When we think about innovation in renewable energy, it’s easy to assume that the materials and breakthroughs of human design hold the greatest potential to power the green revolution. From battery storage technologies that run on compressed air, to next-generation materials that conduct or store energy in ever more efficient patterns, innovation seems to rely on discovery. However, if we’ve learned anything from the last 300 years’ working to explore the earth’s surface, it’s that the keys to the future often lie dormant for millennia, right beneath our feet. So in renewables, innovation may in fact rely on rediscovery.

This way of thinking about geothermal energy sounds like something from science fiction, and until recently it may as well have been. The cost, imprecision, and risk associated with exploring for subterranean aquafer rendered the prospects of developing this specialist area into viable, scalable, source of energy was little more than a fantasy. But the picture is beginning to change. And in many ways, we have fossil fuels to thank for it.

Since 1737, DMT GROUP has been developing tools and technologies that allow us to glimpse beneath the surface of the earth. From our earliest work in the natural resources sector in the North Rhine Westphalia region of Germany, we have kept pace with modernity by ensuring that we take the skills and instruments derived from one discipline and find new applications for them as times and customs change. Today, the tools that once helped identify rich seams of coal across Europe can be applied to geothermal energy, creating a roadmap that can fast-track the development of one of the cheapest, most sustainable sources of renewable energy.

So, what is geothermal energy and why is it only now emerging as a viable energy source? Put simply, geothermal energy draws on naturally occurring sources of heat within the earth’s crust to produce heat and power that can be used on the surface. It has virtually no carbon footprint, its powerplants are the size of a small house, and existing energy infrastructure can be easily modified to utilise geothermal energy. But while tapping geysers and magma has been in practice for the past century, scaling geothermal energy as a major power option has been hindered by the degree of precision required to identify a heat source, the weight of investment required to exploit it, and the financial risk of failure. There is zero value in a dry borehole, and compared to the ease, simplicity, and abundance of fossil fuels like coal, oil, and even gas fields, it has been difficult to make the case for geothermal energy.

Yet it is the very same methods and maps derived from fossil fuel exploration that now place us in a position to consider large-scale geothermal energy as a true alternative. The seismic data created over decades of exploration have given us information about the character of the subsurface down to a depth of more than 6,000m. Combined with new seismic vibration technologies, digital heat flow simulation, data capture and processing, and seismological monitoring, the roadmap to geothermal energy isn’t just being re-written but comes with directions, too. We can model with unmatched accuracy the physical and economic characteristics of a geothermal energy source, substantially de-risking the rollout of geothermal powerplants in modern times.

Fossil fuel exploration has also provided valuable lessons on the social side of geothermal energy too, which is useful given the number of densely populated towns and cities built on top of aquafer. Environmental, Social, and Governance standards and social licence to operate are being aided by new monitoring technologies that capture and present high-quality data about seismic activity. In one example, the Mining Museum in Bochum has gone as far to display seismic data in real time every day of the week – addressing any concerns around transparency and ministering to any anxieties around tremors.

The potential of geothermal energy is just beginning in North Rhine Westphalia, where the “Deep Geothermal Energy Rollout in North West Europe” (DGE-ROLLOUT) is one of two projects in which DMT GROUP is involved. But the sector not only has a renewed exploration roadmap to follow, but a revived political landscape as well. In the most recent elections, every major political party in Germany included a commitment to developing geothermal energy in their manifesto, so even if the current makeup of German politics is unclear, the policies ought to be consistent.

New technologies rely on trust, experience, and proof of concept, and the work that DMT GROUP is leading has made efforts to address each of these needs in our development of our deep geothermal energy resources. As we work together to fast-track geothermal energy in the Ruhr area, and bring engineering performance to this exciting sector, we hope to create a model of responsible exploration that can contribute not the Green Deal in Europe, but to the future of Europe’s energy landscape – even if it is underground. 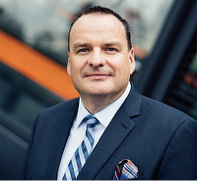 Jens-Peter Lux is Managing Director of DMT GROUP. He joined DMT in 2002 and in the intervening 18 years has held a variety of management positions, covering infrastructure, mining, exploration, energy and geo-services. As Managing Director of DMT, Jens-Peter is responsible for the overall operations within DMT and takes particular responsibility for human resources, talent acquisition and corporate culture throughout the group. Jens-Peter is responsible for DMT business divisions “Civil and Mining Engineering”, Consulting Services and Seismic Exploration. As Managing Director, Jens-Peter’s role also takes leadership over the human capacity drive within DMT’s Strategy2025 growth path. Jens-Peter works closely with department heads across DMT on talent acquisition and retention to support DMT’s renewed focus on internationalisation, digitisation, innovation, customer focus, and sustainability.