Black, White, and RED All Over: a mystery’s travel from a new type of social media to the National Black Book Festival

By: Get News
Author Deeann D. Mathews describes the journey of her first mystery novel from being a serial publication in 2019 to being selected for a national book festival, all while events in 2020 and 2021 eerily echoed the social and racial themes of her work. 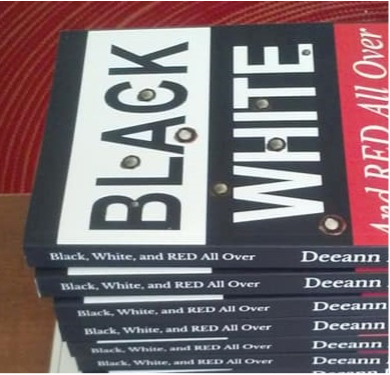 On the eve of the National Black Book Festival, award-winning author Deeann D. Mathews reflected on the path to being accorded the status of a prophetess.

“A reader recently told me I predicted January 6, 2021 in Black, White, and RED All Over,” Ms. Mathews said. “I think it has more to do with me as an African American woman being on the same journey through the nation’s life from 2019 to now as everyone else, while being gifted to sense and write out where things had to go next.”

Ms. Mathews said the first step to her fourth book began in the process of searching for another item increasing its impact on the popular imagination: cryptocurrency.

“I was trying to work my way into some Bitcoin,” she said, “and I eventually found a gateway to be paid in something that trades for Bitcoin as a writer.”

Today, Ms. Mathews is a daily author on Peakd, the social media front end of the censorship-resistant Hive technology.

“After being made writer of the week in my favorite writing community in July 2019,” Ms. Mathews said, “I took 17 days of their writing prompts and wove them into a single mystery, following in the footsteps of Arthur Conan Doyle, who wrote his Sherlock Holmes novels serially for magazine publication.”

Ms. Mathews flipped her serial mystery from Steem to Amazon as a Kindle book in October 2019.

“The name Black, White, and RED All Over is a play on a joke my grandmother told me about newspapers, which in her day were black and white and read, all over,” Ms. Mathews said. “That became the mystery’s core: a new African American newspaper demands information from certain powers that be, and certain powers that be are willing to shed red blood all over to stop it – unless, of course, Captain Hamilton can stop them!”

Black, White, and RED All Over went into paperback in August 2020, at which time Ms. Mathews began getting comments from readers about the eerie parallels between her fourth book and the dark times of racial and social unrest the nation had entered.

“It frankly is terrifying to be right, as someone who studies the Civil War closely,” Ms. Mathews said, “but sadly, the issues that led to that war are still with us. There are still people defining freedom in a way that entitles them to be free while keeping others from freedom, people who are determined to be truly free at all costs, and people trying to hold the nation together in the midst of it all. Little has changed in 156 years but the casting of the actors and the modernity of the set.”

However, Black, White, and RED All Over also strikes bright notes of family love, joy, reconciliation, and hope, and Ms. Mathews attributes the success of the book, including its selection as a featured work for the National Black Book Festival, to that fact.

“Just because 400 years of racism and the corresponding hate that has produced in many of racism’s victims has made the path to just, holy reconciliation difficult doesn’t mean the path doesn’t exist,” Ms. Mathews said. “The good guys of Black, White, and RED All Over come together on the journey to find, follow, and clear that path for their fictional slice of our real society.”

Ms. Mathews said the steps from serial publication on cutting-edge technology to fourth book to big-time festival have been parallel to the story of the best of life in the United States even through deeply troubled times: innovative, surprising, and worth sharing with others who love a great story.