The IEA has released its World Energy Outlook 2021 which details a global rebound in coal and oil use in 2021, as well as the second-largest annual increase in CO2 emissions in history.

“The world’s hugely encouraging clean energy-momentum is running up against the stubborn incumbency of fossil fuels in our energy systems,” said Fatih Birol, the IEA Executive Director. “Governments need to resolve this at COP26 by giving a clear and unmistakable signal that they are committed to rapidly scaling up the clean and resilient technologies of the future. The social and economic benefits of accelerating clean energy transitions are huge, and the costs of inaction are immense.”

The IEA analyzed current government net-zero emissions pledges, finding demand for fossil fuels would peak by 2025 and global CO2 emissions would fall by 40% by 2050. The global average temperature rise in 2100 is held to 2.1°C in the "Announced Pledges Scenario."

The "Net-Zero by 2050" scenario calls for a massive push for clean electrification that requires a doubling of global solar PV and wind deployment relative to current pledges; investment in electricity infrastructure and all forms of system flexibility (including hydropower); rapid phase-out of coal; a "relentless" focus on energy efficiency; drive to cut methane emissions from fossil fuel operations; significant increase in clean energy innovation investment. 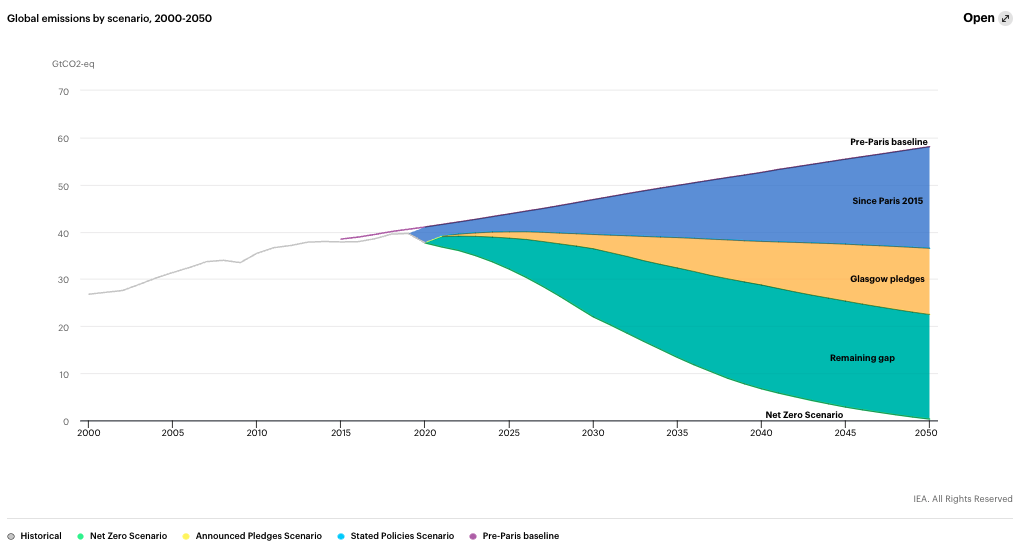 The report notes that $4 trillion in annual clean energy project investment by 2030 is needed to get the world on track to keep global temperature increases within 1.5 °C of pre-industrial levels -- with 70% of new spending being directed to developing economies. The world is not investing enough, the authors wrote, to meet future energy needs, which could lead to prolonged volatility in energy markets. 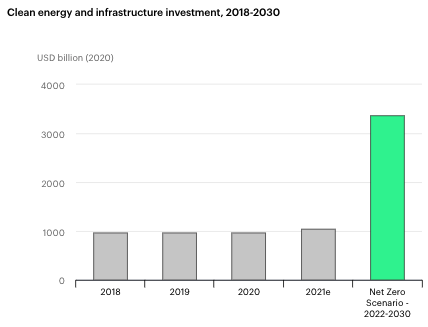 The IEA called on governments and agency leaders to immediately invest in grid resiliency, as extreme weather events become more frequent due to climate change.

The IEA directed government leaders to use the World Energy Outlook 2021 as a guide at COP26, which takes place from Oct. 31-Nov. 12 in Glasgow, Scotland.