This news release constitutes a "designated news release" for the purposes of the Company's prospectus supplement dated February 2, 2021 to its short form base shelf prospectus dated January 27, 2021.

"The first quarter of fiscal 2022 has continued the momentum that we had in fiscal 2021. It's been an incredible year for HIVE. Despite the effects of COVID-19 and associated supply chain issues, we have achieved record results and continued to increase our Ethereum and Bitcoin mining capacity," said Frank Holmes, Interim Executive Chairman of HIVE.

What many investors have not realized the significance of mining Ethereum in addition to Bitcoin, which has continued to exhibit very strong performance throughout this calendar year, after our Q1 period end of June 30, 2021, and even after the London Hard Fork in August 2021.

As such, Hive appears to be the most profitable Crypto mining company amongst our peers with a rapidly growing Bitcoin HODL strategy.

"During this most recent quarter we acquired HIVE Atlantic in April 2021, giving us a substantial Bitcoin mining operation in New Brunswick, Canada. We are well into the process of expanding capacity through new construction at this data centre campus and are installing next generation Bitcoin mining equipment which is arriving monthly.

"The acquisition of the New Brunswick data centre campus gives us a strategic advantage in this competitive industry. Owning our own state-of-the-art facilities means we don't have to worry about landlords raising the rent and gives us full control of our operations.

"HIVE now has the land, buildings, talent, and mining equipment we need to succeed. We are focused on improving efficiency and profitability by optimizing cryptocurrency mining output. We're lowering costs and maximizing our existing electrical and infrastructure capacity by installing new mining equipment as the orders roll in.

"During the first fiscal quarter we received ASIC machines every month, which allowed us to allocate these new generation miners between our 2 facilities in Canada. These purchases were partially funded by the $100 million At-The-Market Program. We sold a small amount of Ethereum to upgrade our equipment with Nvidia latest generation of high performing GPU chips but continue to HODL 25,000 ETH and 1,030 BTC. We continue to ramp up production of both BTC and ETH."

For the three months ended June 30, 2021, revenue from digital currency mining was $37.2 million, an increase of approximately 466% from the prior year. This was primarily due to an increase in the production of Ethereum and Bitcoin stemming from mining expansion, and considerably higher coin prices.

Net income during the quarter ended June 30, 2021 was $18.6 million, or $0.05 per share, compared to $1.8 million, or $0.00 per share, the same period last year. The improvement was driven primarily by the increase in gross mining margin1, higher Ethereum and Bitcoin prices, gains on the sale of digital currencies, and foreign exchange. 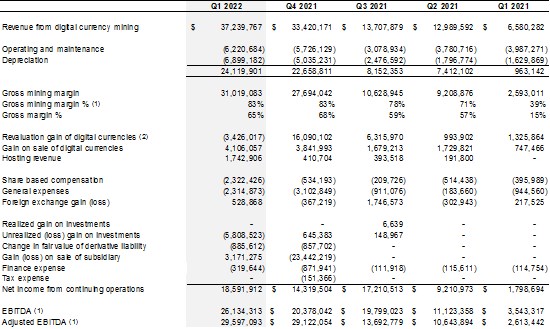 (1) Non-IFRS measure. A reconciliation to its nearest IFRS measures is provided under "Reconciliations of Non-IFRS Financial Performance Measures" in the Company's MD&A.

(2) Revaluation is calculated as the change in value (gain or loss) on the coin inventory. When coins are sold, the net difference between the proceeds and the carrying value of the digital currency (including the revaluation), is recorded as a gain (loss) on the sale of digital currencies

The Company's Consolidated Financial Statements and Management's Discussion and Analysis (MD&A) thereon for the three months ended June 30, 2021 will be accessible on SEDAR at www.sedar.com under HIVE's profile and on the Company's website at www.HIVEblockchain.com.

Management will host a webcast on Monday, October 4, 2021 at 10:00 am Eastern Time to discuss the Company's financial results. Presenting on the webcast will be Frank Holmes, Executive Chairman, and Darcy Daubaras, Chief Financial Officer. Click here to register for the webcast.

HIVE Blockchain Technologies Ltd. went public in 2017 as the first cryptocurrency mining company with a green energy and ESG strategy.

HIVE is a growth-oriented technology stock in the emergent blockchain industry. As a company whose shares trade on a major stock exchange, we are building a bridge between the digital currency and blockchain sector and traditional capital markets. HIVE owns state-of-the-art, green energy-powered data centre facilities in Canada, Sweden, and Iceland, where we source only green energy to mine on the cloud and HODL both Ethereum and Bitcoin. Since the beginning of 2021, HIVE has held in secure storage the majority of its ETH and BTC coin mining rewards. Our shares provide investors with exposure to the operating margins of digital currency mining, as well as a portfolio of cryptocurrencies such as ETH and BTC. Because HIVE also owns hard assets such as data centers and advanced multi-use servers, we believe our shares offer investors an attractive way to gain exposure to the cryptocurrency space. HIVE traded over 2 billion shares in 2020.

We encourage you to visit HIVE's YouTube channel here to learn more about HIVE.

Except for the statements of historical fact, this news release contains "forward-looking information" within the meaning of the applicable Canadian securities legislation that is based on expectations, estimates and projections as at the date of this news release. "Forward-looking information" in this news release includes information about restructuring of the Company's operations and sustainable future profitability; potential further improvements to the profitability and efficiency across mining operations by optimizing cryptocurrency mining output, continuing to lower direct mining operations cost structure, and maximizing existing electrical and infrastructure capacity including with new mining equipment in existing facilities; continued adoption of Ethereum and Bitcoin globally; the potential for the Company's long term growth; the business goals and objectives of the Company, and other forward-looking information includes but is not limited to information concerning the intentions, plans and future actions of the parties to the transactions described herein and the terms thereon.

This news release also contains "financial outlook" in the form of gross mining margins, which is intended to provide additional information only and may not be an appropriate or accurate prediction of future performance, and should not be used as such. The gross mining margins disclosed in this news release are based on the assumptions disclosed in this news release and the Company's Management Discussion and Analysis for the fiscal year ended March 31, 2021, which assumptions are based upon management's best estimates but are inherently speculative and there is no guarantee that such assumptions and estimates will prove to be correct.

To view the source version of this press release, please visit https://www.newsfilecorp.com/release/98425