By: StockMarket.com
Top Restaurant Stocks For Your October 2021 Watchlist

The Delta variant has caused panic in many sectors of the stock market and this includes restaurant stocks. That said, many parts of the country have been easing lockdown restrictions. Now, it is no secret that the restaurant industry has faced many challenges throughout the pandemic. However, it continues to show resilience on the back of marketing initiatives and leveraging technology to provide digital offerings. So, those who bring their menu online are adapting well despite lockdown restrictions.

In fact, some of the giants in the industry such as McDonald’s Corp (NYSE: MCD) and Domino’s Pizza (NYSE: DPZ) are performing well this year. MCD stock and DPZ stock have risen more than 15% this year. Overall, restaurants are optimistic that their businesses will return to pre-pandemic levels as people are dining in again. It’s true that takeaways and deliveries are convenient, but nothing beats dining in with your friends and family with hot sizzling food served to your table. These are little things that are often taken for granted. So, do you think restaurant stocks will thrive again as the current wave of the pandemic eases? If so, here is a list of the top four restaurant stocks in the stock market now.

Let us kick start the list with one of the largest coffee retailers in the world, Starbucks. With operations in approximately 83 markets around the world, the company is no stranger to most consumers. Not only that, the company also sells goods and services under various brands that include Teavana, Seattle’s Best Coffee, Evolution Fresh, Ethos, and Princi. SBUX stock has risen over 30% over the past year.

Despite largely being a coffee specialist, Starbucks continues to address the demands of its customers. Today, the company has added new plant-based items in Chile as it expands its vegetarian menu. Also, there are additions in the form of non-dairy milk alternatives and sandwiches made with faux beef. From this, we can see that the company is responding to the great interest of customers in vegetarian options.

Yesterday, the company announced that it will be reporting its fiscal fourth-quarter earnings on October 28. So, let us review its previous quarter’s results. For its third quarter, consolidated net revenues increased by 78% to $7.5 billion compared to the prior year’s quarter. In addition, it also opened 352 new stores for its third quarter, ending the period with a record 33,295 stores globally. With that in mind, do you believe SBUX stock will be able to maintain its momentum moving forward? 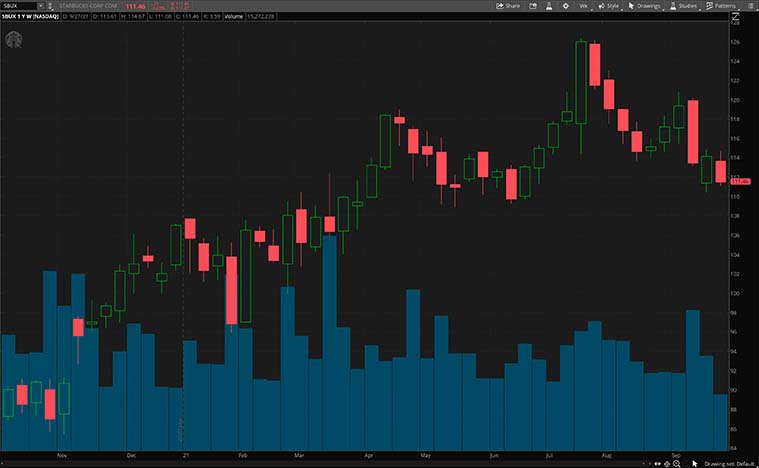 Following that, we will be looking at Chipotle Mexican Grill. As it stands, Chipotle is one of the largest restaurant companies in the world that serves a menu of burritos, tacos, and salads. It operates more than 2,500 restaurants worldwide and most of them are based in the U.S. One could say that it has been a fantastic year for CMG stock thus far, showing gains of almost 40% since the start of the year.

Earlier this month, Chipotle announced that it is continuing to evolve its digital experience with enhancements to the Chipotle Rewards program. The program has helped the company to surpass the $2 billion mark in digital sales this year. In fact, it now boasts more than 24 million members and remains among the fastest-growing loyal programs in the history of the restaurant industry.

In light of this, the company is officially rolling out Extras, an exclusive feature that unlocks access to extra points. Thus, helping members to get free Chipotle even faster. The new feature resembles a game where there are challenges to earn extra points and collect achievement badges. As we witness the evolution of digital business, the company intends to be at the forefront of this evolution. Furthermore, Chipotle will be releasing its third-quarter earnings on October 21. Now, would you consider investing in CMG stock ahead of its earnings report? 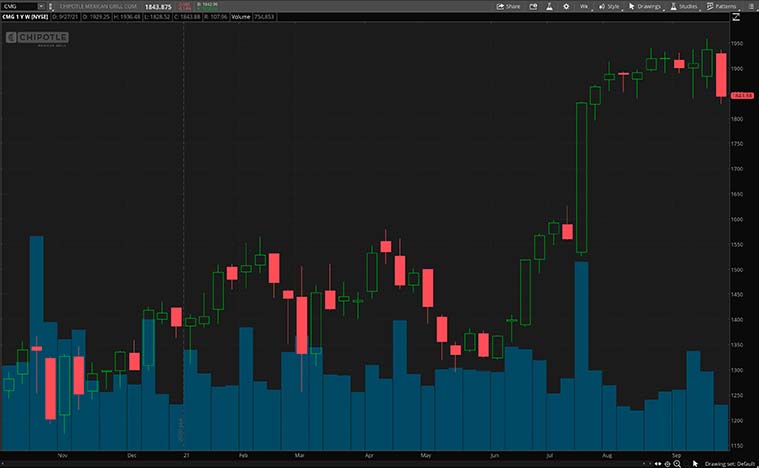 Another top restaurant stock on investors’ radar is Yum! Brands. For those unaware, the company operates the brands KFC, Pizza Hut, Taco Bell, The Habit Burger Grill, and Wingstreet worldwide. The only exception would be in China, where it operates via a separate company, Yum China Holdings (NYSE: YUMC).

In September, Yum! Brands completed the acquisition of Dragontail Systems Limited. It is an innovative provider of technology solutions for the food industry. Dragontail’s platform focuses on optimizing and managing the entire food preparation process from order through delivery. Therefore, it automates the kitchen flow combined with the process of dispatching drivers. Again, we see the top restaurant companies such as Yum! are emphasizing the need to grow their digital strategies.

On top of that, the company also announced that it intends to hire 40,000 new permanent team members to work in restaurants across the country. The positions are available at both corporate and franchised restaurants with the majority focused on cook and driver roles. Well, this is a strong statement to show the rising demand for Yum!’s products and offerings. Given these considerations, do you have YUM stock on the top of your watchlist? 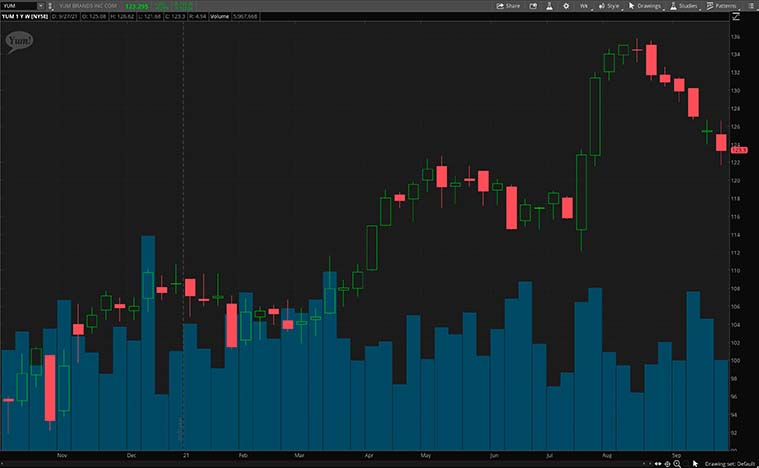 Dave & Buster’s is an owner and operator of high-volume entertainment and dining venues. The company offers its customers the opportunity to eat, drink, play, and watch all in one location. Put simply, you could have a social and fun time while having good food and beverages at the same time. Also, its stores are designed to accommodate premium sports viewing events, private parties, and business functions.

On the financial end, the company appears to be recovering to pre-pandemic levels. During its second quarter, its revenue was a record $377.6 million, representing a staggering increase of 642.9% year-over-year. Meanwhile, its net income totaled $52.8 million compared to a net loss of $58.6 million the prior year’s quarter. Safe to say, Dave & Buster’s is demonstrating great resilience as all its 142 stores are now open while posting record revenues along the way.

On top of that, it also announced the launch of its NFT Digital Collectibles Prize program last week. To commemorate the launch, the first collector to own every city card and game coin will receive a 1 of 1 Super Master NFT and a $10,000 Dave & Buster’s Power Card. Well, this goes without saying, the program will further cultivate the fun vibes surrounding the company. All things considered, would you add PLAY stock to your watchlist?