U.S. stock market futures are on the rise early on Tuesday morning. For some perspective, the broader stock market was hit hard amidst concerns stemming from international equities. Adding to that pressure was the looming deadline to raise the debt ceiling over at Washington. Today, the star of the show would be the start of the two-day-long Federal Open Market Committee (FOMC) meeting. With so many factors potentially weighing in on the market now, some investors could be eagerly watching before making any plays.

In general, Cornerstone Wealth chief investment officer Cliff Hodge provided some insight into the current happenings. He said, “Markets are clearly having some angst on the potential spillover effects from Evergrande, along with some nervousness over the September FOMC meeting. We’ve been in the camp that we’re overdue for a correction.” Hodge also added that the firm is not worried about a market crash seeing as the market has known about these factors for the past few weeks now. Alongside all of this, there is also plenty of stock market news to note today as well. As of 6:40 a.m. ET, the Dow, S&P 500, and Nasdaq are up by 0.91%, 0.82%, and 0.73% respectively.

Bitcoin Drops Along With The Broader Stock Market

Bitcoin (BTC), among other crypto assets, was also ravaged during yesterday’s stock market losses. So much so that the leading digital currency saw its value drop by as much as 10% on Monday. Sure, crypto bulls may hail the cryptocurrency as a new potential safe haven, given its similarities with gold. However, yesterday’s sell-offs would suggest otherwise. If anything, this would be the case given the overall volatility that Bitcoin is known for. Those who bought on the dips yesterday would have reaped rewards now. That’s considering that the cryptocurrency has regained most of yesterday’s losses.

Regardless, Leuthold Group chief investment strategist, Jim Paulsen has his own take on this. He said, “To me, it’s a very diversifying asset against most of the other things in the portfolio. That in itself can lend itself to lower volatility, but it doesn’t necessarily mean that it won’t participate in risk-off periods. There’s a difference between safe haven and diversifying.” Paulsen went on to describe Bitcoin as a “method of exchange” instead of a currency at this point. Even so, major names in the fintech space like PayPal (NASDAQ: PYPL) and Visa (NYSE: V) are already integrating crypto-related services into their portfolios. Should there be long-term believers among investors now, they could be keen on buying on the current dips.

Covid Death Toll On The Rise, Vaccine For Children In The Works

In pandemic-related news, COVID-19 is reportedly the deadliest outbreak in recent American history. According to data compiled by Johns Hopkins University, reported U.S. deaths from Covid crossed the 675,000 mark yesterday. The current daily average fatalities are now over 1,900. This would exceed the death toll of the 1918 flu which was the previous most deadly disease outbreak in the country. Overall, these figures would highlight that the fight against the current pandemic is far from over. As such, the case for vaccine booster shots continues to grow as well.

Additionally, Pfizer (NYSE: PFE) and BioNTech (NASDAQ: BNTX) recently released new data on their Covid vaccine. According to the vaccine frontrunners, a smaller dose of their vaccine produces robust immune responses in children ages 5 to 11. In turn, the duo is now aiming to submit this data for emergency use approval by the end of this month. Subsequently, former FDA commissioner Dr. Mark McClellan appears optimistic on this front as well. In an interview with CNBC yesterday, Dr. McClellan said, “Those findings are very promising, especially around the ability of a very small dose, leading to a very strong immune reaction.” He also added that “action by the FDA” in the next month would be feasible. Given all of this, vaccine stocks could see continued activity even amidst the current market conditions.

Adobe (NASDAQ: ADBE) is set to report its third-quarter earnings in today’s post-market trading session. For one thing, the enterprise software giant would be one to note this week. Despite yesterday’s sell-off, the company’s shares are still holding strong with year-to-date gains of over 30%. Notably, ADBE stock currently outpaces the broader Nasdaq index by twice as much over the same period. By and large, the current tailwinds behind Adobe’s core offerings persist along with the pandemic. With all this in mind, the real question is whether or not Adobe can maintain its current momentum.

Well according to Wall Street’s estimates, the answer could be a yes. Now, consensus projections suggest that Adobe could report earnings per share of about $3.02 on revenue of $3.9 billion. Year-over-year this would mark gains of 17.5% and 20.9% respectively. Just yesterday, Wells Fargo (NYSE: WFC) reiterated its Overweight rating on ADBE stock ahead of its earnings call. The firm even hailed Adobe as “one of the crown jewels of software”, citing solid core positioning and industry tailwinds as major growth factors. All in all, it would not surprise me to see investors eyeing ADBE stock after today’s closing bell. 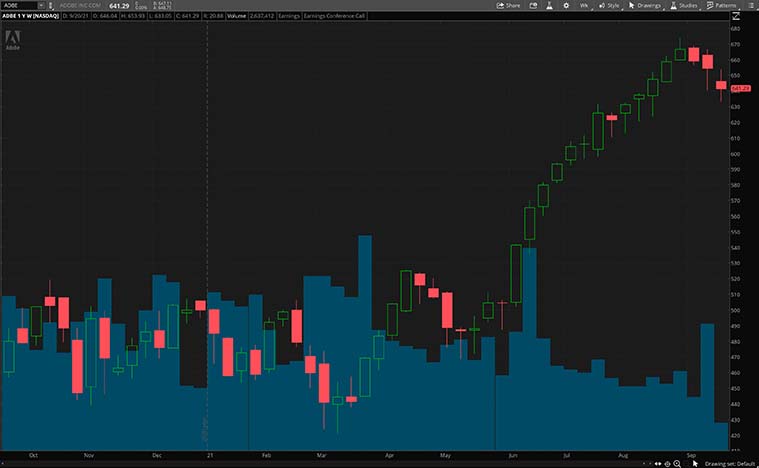 Other Notable Earnings On Tap Today

Not to mention, several other major companies are looking to report their earnings today. For those looking to jump on some pre-market earnings action, we have AutoZone (NYSE: AZO), Cracker Barrel (NASDAQ: CBRL), Neogen (NASDAQ: NEOG), and Apogee (NASDAQ: APOG) on tap.

Alternatively, in the case you are keener on earnings after the closing bell, there is a good mix of names to consider as well. Namely, FedEx (NYSE: FDX), Aurora Cannabis (NASDAQ: ACB), and Stitch Fix (NASDAQ: SFIX) among others would be in focus. Whether you are cautiously observing the stock market this week or are looking to diversify your portfolio on the current dips, one thing remains. There is no shortage of exciting news to note in the stock market now.