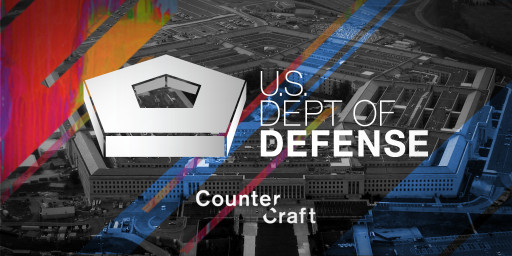 CounterCraft, the global leader in active defense technology and the next generation of threat intelligence, has been awarded a production contract in order to more quickly and easily scale their deception technology solution across the United States Department of Defense. This contract is the next step from CounterCraft's prototype contract through the Defense Innovation Unit (DIU), allowing the DoD to enhance cyber threat detection and intelligence-gathering capabilities.

The DoD chose CounterCraft after an industry-wide down selection process to meet key mission-critical performance requirements, such as:

This contract allows CounterCraft's award-winning and innovative Cyber Deception Platform to be used not just with back-office software but high-priority operational units. CounterCraft's platform uses sophisticated deception environments to detect and alert unauthorized adversarial activity. CounterCraft's technology has been used extensively in military wargames including work at NATO level with Nation State level red teams. This move to a production Other Transaction (OT) contract means CounterCraft will provide not just software licensing but technology, servicing, training, support and production-level resilience across the DoD.

"We created CounterCraft to make sure we had the most flexible and powerful deception technology in the world today," said David Barroso, CEO and co-founder of CounterCraft. "Its rapid rollout within the DoD shows our proven capability in the field, and underlines the success that we have had working for national security. We are committed to continue to serve and support the mission within the U.S. government."

The production OT contract is a result of an early-2019 prototype OT contract with DIU. DIU's mission is to prototype and then scale cutting-edge commercial technology for use in the national security domain. Working with our strategic subcontractor, Parsons Corporation, a leader in cybersecurity support to the DoD, CounterCraft is ready to deliver the same capability to many other organizations across the DoD and potentially across the U.S. Government.

"Deception technology will give our warfighters a decision advantage in the future combat environment," said Paul Decker, president of Parsons' defense and intelligence sector. "Partnered with CounterCraft for years to come, we're excited to see this revolutionary capability become operational."

CounterCraft has built specific enhancements to their deception technology to deal with mission critical performance requirements from the U.S. DoD. These make the platform applicable to defense and national security clients thanks to its ability to work on air-gapped systems and unique technology features that make it virtually impossible to detect.