Best Dividend Stocks To Buy In August 2021? 5 Names To Watch

By: StockMarket.com
Do You Have These Top Dividend Stocks In Your August 2021 Watchlist?

With the broader stock market trading near all-time highs across the board, dividend stocks could be worth watching. This would be the case as investors brace for the month of August. Historically, August has not been the best month for the stock market in general. Since 2010, the S&P 500 has reportedly fallen in August six times, the most among the other months. At face value, this may just be a random occurrence. However, the rise in valuations across the market thanks to reopening and economic growth trends could warrant a sell-off. As a result, some would argue that turning towards more defensive options like dividend stocks would be wise now.

For the most part, this would see the more well-established companies in the stock market today gain traction. In relation to the current pandemic, health care giants such as Pfizer (NYSE: PFE) and Johnson & Johnson (NYSE: JNJ) would be viable options now. After all, not only do they play crucial roles in fighting the pandemic, but they also have a long history of paying dividends. Namely, when it comes to dividend stocks, consistency is a key factor to consider. Having read this far, you might be interested in adding some to your portfolio as well. In that case, here are five trending names worth knowing now.

To begin this list, we have Taiwan Semiconductor Manufacturing Company (TSM), a dividend company that pioneered the pure-play foundry business model. In essence, it is the world’s leading dedicated semiconductor foundry and supports a thriving ecosystem of global customers and partners. It boasts state-of-the-art semiconductor process technologies. It has global operations spanning Asia, Europe, and North America and manufactures over 10,000 products for over 500 customers. TSM stock currently trades at $118.56 as of 12:45 p.m. ET.

Last month, the company announced its second-quarter financials. Firstly, it posted consolidated net revenue of $13.29 billion, up by 19.8% compared to a year ago. Secondly, the company reported a net income of $4.81 billion for the quarter, increasing by 11.2% year-over-year or diluted earnings per share of $0.93. The company says that shipments of its 5-nm wafers accounted for 18% of total wafer revenue, while 7-nm wafers accounted for 31%. TSM also says that this quarter’s business was driven by continued strength in HPC and automotive-related demand. All things considered, will you watch TSM stock? 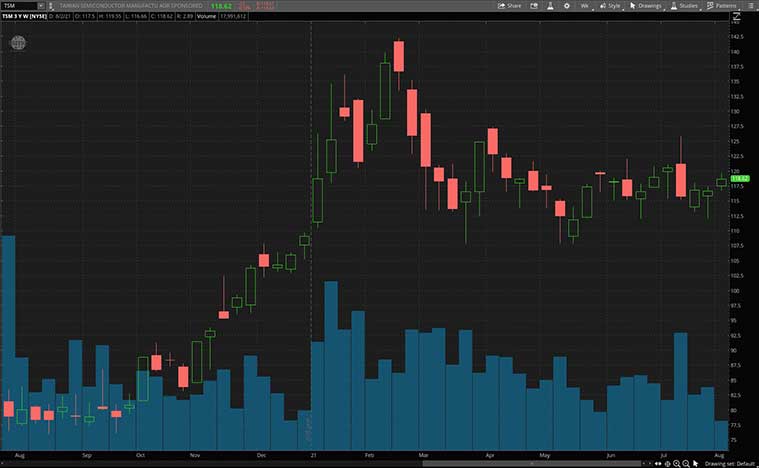 Nike is a multinational corporation that is a world-leading designer and distributor of authentic athletic footwear, apparel, equipment, and accessories for a wide variety of sports. In 2020, the company was one of the most valuable brands among sports businesses. Nike markets its products under its own brand as well as Air Jordan, Air Force 1, and Nike Golf among others. It also has subsidiaries like Converse. NKE stock currently trades at $172.92 as of 12:45 p.m. ET. Nike’s latest dividend was $0.275 per share and was declared on May 6, 2021.

On June 24, 2021, the company reported strong fourth-quarter financials. Diving in, revenue for the quarter was $12.3 billion, up by 96% year-over-year. A chunk of this revenue came from its Nike Direct sales, at $4.5 billion, an increase of 73% compared to a year earlier. The company also posted diluted earnings per share of $0.93 for the quarter. Nike says that this quarter’s strong results demonstrated its unique competitive advantage and deep connection with consumers all over the world. Given the excitement surrounding the company’s latest financials, will you add NKE stock to your watchlist? 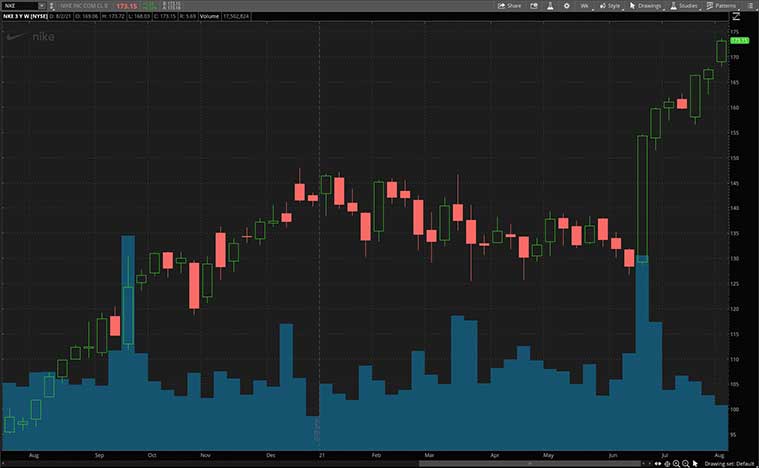 Chevron is an energy corporation that is one of the largest oil companies in the U.S. It is active in over 180 countries and is engaged in every aspect of the oil and natural gas industries. This includes hydrocarbon exploration and production, refining, and chemicals manufacturing. In detail, its downstream operations manufacture and sell products such as fuels, lubricants, and petrochemicals. CVX stock currently trades at $101.58 apiece as of 12:46 p.m. ET and has year-to-date gains of over 17%.

Last week, the company reported its second-quarter financials for 2021. In it, Chevron reported earnings of $3.1 billion for the quarter or diluted earnings per share of $1.60. It also reported cash flow from operations of $7 billion and a free cash flow of $5.2 billion. “Second-quarter earnings were strong, reflecting improved market conditions, combined with transformation benefits and merger synergies,” said Mike Wirth, Chevron’s chairman and chief executive officer. With that being said, will you watch CVX stock? 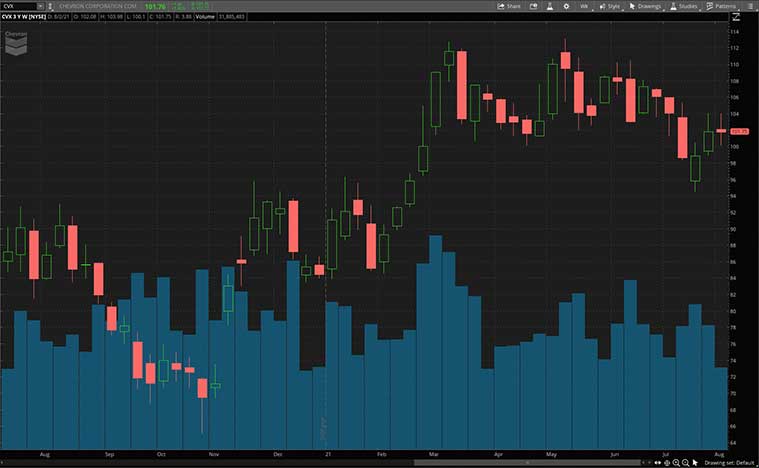 Following that, we will be taking a look at the General Dynamics Corporation. In brief, it mainly identifies as an aerospace and defense corporation. As the third-largest defense contractor globally by sales, the company would be worth noting now. Moreover, GD stock is currently boasting gains of over 30% year-to-date and trades within striking distance of its 52-week high. With the company’s shares valued at $197.07 apiece as of 12:46 p.m. ET, could it be a top dividend stock to invest in now?

Well, if anything, General Dynamics appears to be holding strong in terms of financials. In its latest quarter fiscal posted last week, the company raked in total revenue of $9.2 billion. Subsequently, it also reported an earnings per share of $2.61 for the quarter, marking a sizable year-over-year increase of 19.7%. Overall, CEO Phebe Novakovic cited the company’s strong cash flow, improved margins, and increased Aerospace order activity for the positive quarter. Could all this make GD stock a top watch for you now? 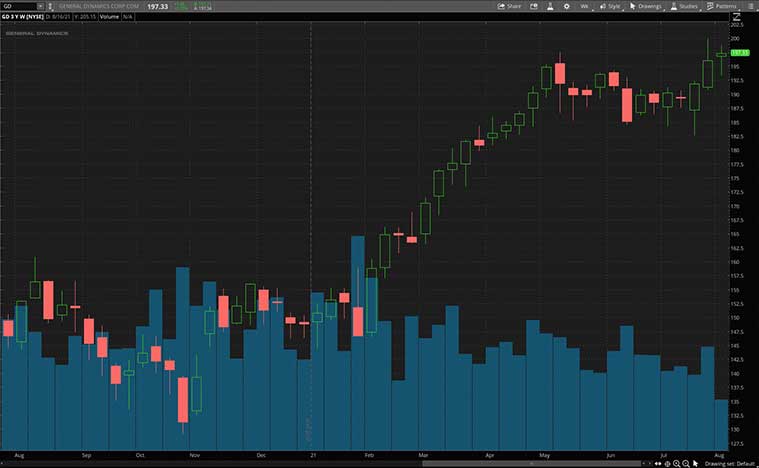 Last but not least, we have the International Business Machines Corporation or IBM for short. From its industry-leading hardware to its groundbreaking tech research, this would be the case. Impressive portfolio aside, the company continues to thrive in terms of financials as well. In its latest quarter fiscal posted last month, the company reported an earnings per share of $2.33 on revenue of $18.75 billion. Notably, IBM exceeded both its own expectations and that of Wall Streets. As it stands IBM stock is now trading at $142.76 as of 12:47 p.m. ET.

While all this is great for IBM, the company does not seem to be slowing down anytime soon. As of today, IBM is now working with CAST, a provider of software intelligence solutions. Through this partnership, the pair is implementing CAST Highlight, a software intelligence product geared towards rapid application analysis. In practice, this would help bolster the adoption of IBM Cloud by enterprises now. Safe to say, this is a strategic play by IBM as it will be increasing the accessibility of its cloud offerings. Because of this, will you be keeping an eye on IBM stock? 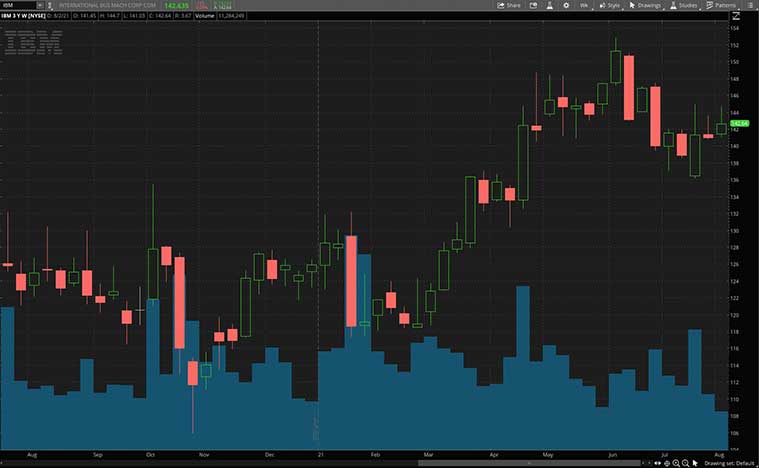