You can see fires, but now Qwake wants firefighters to see through them

By: TechCrunch
When it comes to tough environments to build new technology, firefighting has to be among the most difficult. Smoke and heat can quickly damage hardware, and interference from fires will disrupt most forms of wireless communications, rendering software all but useless. From a technology perspective, not all that much has really changed today when it […]

When it comes to tough environments to build new technology, firefighting has to be among the most difficult. Smoke and heat can quickly damage hardware, and interference from fires will disrupt most forms of wireless communications, rendering software all but useless. From a technology perspective, not all that much has really changed today when it comes to how people respond to blazes.

Qwake Technologies, a startup based in San Francisco, is looking to upgrade the firefighting game with a hardware augmented reality headset named C-THRU. Worn by responders, the device scans surrounding and uploads key environmental data to the cloud, allowing all responders and incident commanders to have one common operating picture of their situation. The goal is to improve situational awareness and increase the effectiveness of firefighters, all while minimizing potential injuries and casualties.

The company, which was founded in 2015, just raised about $5.5 million in financing this week. The company’s CEO, Sam Cossman, declined to name the lead investor, citing a confidentiality clause in the term sheet. He characterized the strategic investor as a publicly-traded company, and Qwake is the first startup investment this company has made.

(Normally, I’d ignore fundings without these sorts of details, but given that I am obsessed with DisasterTech these days, why the hell not).

Data was the new oil, until the oil caught fire

Qwake has had success in recent months with netting large government contracts as it approaches a wider release of its product in late-2021. It secured a $1.4 million contract from the Department of Homeland Security last year, and also secured a partnership with the U.S. Air Force along with RSA in April. In addition, it raised a bit of angel funding and participated in Verizon’s 5G First Responder Lab as part of its inaugural cohort (reminder that TechCrunch is still owned by Verizon).

Cossman, who founded Qwake along with John Long, Mike Ralston, and Omer Haciomeroglu, has long been interested in fires, and specifically, volcanos. For years, he has been an expeditionary videographer and innovator who climbed calderas and attempted to bridge the gap between audiences, humanitarian response, and science.

“A lot of the work that I have done up until this point was focused on earth science and volcanoes,” he said. “A lot of projects were focused on predicting volcanic eruptions and looking at using sensor networks and different things of that nature to make people who live in those regions that are exposed to volcanic threats safer.”

During one project in Nicaragua, his team suddenly found itself lost amidst the smoke of an active volcano. There were “thick, dense superheated volcanic gases that prevented us from navigating correctly,” Cossman said. He wanted to find technology that might help them navigate in those conditions in the future, so he explored the products available to firefighters. “We figured, ‘Surely these men and women have figured out how do you see in austere environments, how do you make quick decisions, etc.’”

He was left disappointed, but also with a new vision: to build such technology himself. And thus, Qwake was born. “I was pissed off that the men and women who arguably need this stuff more than anybody — certainly more than a consumer — didn’t have anywhere to get it, and yet it was entirely possible,” he said. “But it was only being talked about in science fiction, so I’ve dedicated the last six years or so to make this thing real.”

Building such a product required a diverse set of talent, including hardware engineering, neuroscience, firefighting, product design and more. “We started tinkering and building this prototype. And it very interestingly got the attention of the firefighting community,” Cossman said. 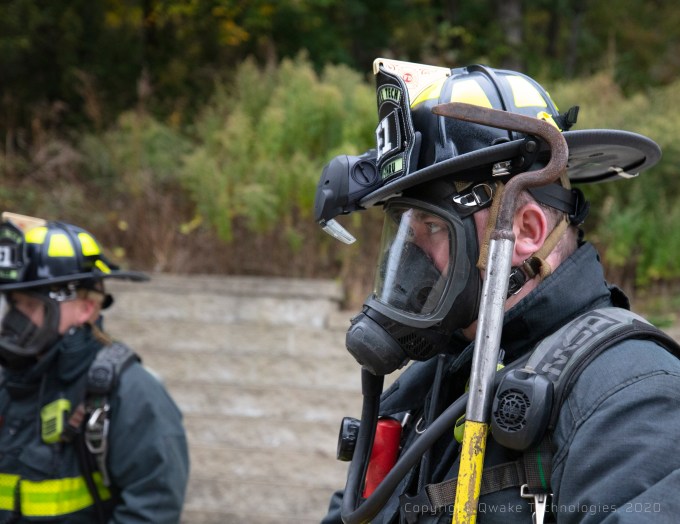 Qwake at the time didn’t know any firefighters, and as the founders did customer calls, they learned that sensors and cameras weren’t really what responders needed. Instead, they wanted more operational clarity: not just more data inputs, but systems that can take all that noise, synthesize it, and relay critical information to them about exactly what’s going on in an environment and what the next steps should be.

Ultimately, Qwake built a full solution, including both an IoT device that attaches to a firefighter’s helmet and also a tablet-based application that processes the sensor data coming in and attempts to synchronize information from all teams simultaneously. The cloud ties it all together.

So far, the company has design customers with the fire departments of Menlo Park, California and Boston. With the new funding, the team is looking to advance the state of its prototype and get it ready for wider distribution by readying it for scalable manufacturing as it approaches a more public launch later this year.

When the Earth is gone, at least the internet will still be working