It Starts With A Spark! Macy’s 4th of July Fireworks® The Nation’s Largest Independence Day Celebration Is Back Live From New York City 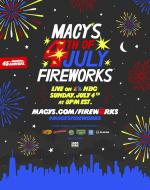 America’s biggest Independence Day celebration is back, live from New York City as the 45th Annual Macy’s 4th of July Fireworks® ignites the night. On Sunday, July 4th at approximately 9:25 p.m., Macy’s (NYSE:M) will commence a jaw dropping pyrotechnic salute to American bravery and optimism in an incomparable barrage of color, light, shape and sound. This year’s Macy’s Fireworks show will launch more than 65,000 shells and effects from five barges positioned on the East River centered in midtown, delighting New York City spectators and a nationwide television audience.

“As America commemorates Independence Day, we are thrilled to join the celebration with a spectacular Macy’s 4th of July Fireworks display honoring the heroic spirit of our nation,” said Will Coss, executive producer of Macy’s 4th of July Fireworks. “Live from New York City, five barges positioned on the East River will launch an epic celebration that will inspire a renewed sense of hope and optimism among our fellow New Yorkers and viewers nationwide.”

“The Summer of New York City is underway!” said New York City Mayor Bill de Blasio. “New Yorkers have worked hard to fight back COVID-19 and build a recovery for all of us. This summer, we can’t wait to reconnect with the iconic events that make our city great. These fireworks make us all proud to be New Yorkers and Americans, and I’m looking forward to a joyful and safe viewing this year.”

Macy’s 4th of July Fireworks first burst onto the New York City sky with a special U.S. bicentennial show in 1976. Since then, Macy’s Fireworks have grown in scale and artistry as they burst to life over many of New York City’s waterways and neighborhoods. The 45th edition of Macy’s Fireworks is conceived, designed and produced by Macy’s with Pyro Spectaculars by Souza. Designed to ignite in synchronization to a patriotic musical score, the 25-minute display will feature a host of shells and effects in dozens of colors and shapes including eclipsing fans, triple linking rainbows, blue jellyfish with crackling tentacles and red, white and blue waterfalls, creating dramatic effects a mile across the river and from 1,000 feet in the air to the water’s edge.

A Hero’s Journey, The Musical Score

The musical score is the basis for the fireworks choreography and this year it salutes the hero within – the spirit of optimism and bravery of the American people. Patriotic classics such as “The Star-Spangled Banner” and “America the Beautiful,” featuring guest performances from The United States Army Field Band & Soldiers’ Chorus, mix with original instrumentals and a soaring rendition of “Lift Every Voice and Sing” by Broadway Inspirational Voices; creating a moving musical showcase for the pyro in the sky.

The score for Macy’s Fireworks will also feature music superstar Tori Kelly singing a powerful rendition of Rodgers and Hammerstein’s classic “You’ll Never Walk Alone” from the musical Carousel. This tribute to everyday heroes will be the heart of this year’s Macy’s Fireworks and will serve as the musical accompaniment to the signature Macy’s Golden Mile moment of the spectacle, where thousands of golden-hued shells create a dramatic cascade effect 1,000-feet in the air and more than a mile wide across the East River.

On July 4th, Macy’s Fireworks may be viewed from the comforts of home and any area with an unobstructed view of the sky above the East River in Midtown. Public viewing locations will be set up and managed by the NYPD. Viewing will be available for verified fully vaccinated spectators on elevated portions of the FDR Drive in Manhattan with entry points at East 23rd, East 34th and East 42nd Streets. ADA/Special Needs public viewing for verified fully vaccinated spectators will be accessible at the East 34th Street entry point. Public viewing for non-vaccinated spectators will be available along portions of the Queens, Brooklyn, and Manhattan waterfronts. As health and safety regulations evolve, these changes may impact the City’s public viewing plan, so spectators are encouraged to check macys.com/fireworks for the most up-to-date viewing information including entry details, health and safety protocols and marine viewing.

Spectators from coast-to-coast will also have a front row view of the pyro in the sky by tuning to NBC’s national broadcast of Macy’s 4th of July Fireworks Spectacular (8-10 p.m. ET/PT, 7-9 p.m. CT/MT, check local listings). The nation's No. 1 Independence Day special will also feature performances from some of music’s brightest stars including Black Pumas, Coldplay, OneRepublic, Reba McEntire, and more.

Giving Back – Macy’s Salutes Those Who Serve

No Independence Day celebration would be complete without a special tribute to members of the U.S. Armed Forces who work tirelessly to defend and protect our freedoms. In addition to the patriotic tributes during the Macy’s Fireworks display, once again this year, Macy’s and its customers nationwide will come together for a charitable giving program to support active duty military, veterans and military families. During “Macy’s Salutes Those Who Serve” campaign, which kicks off Thursday, July 1 and runs through Saturday, July 31, Macy’s shoppers are invited to round up their in-store purchases to the nearest dollar (up to $.99) and donate the change, or donate online to support Blue Star Families and Bunker Labs. One hundred percent of these donations will benefit both charities evenly. For Blue Star Families, the campaign will support programs like its Racial Equity Initiative, which deploys a community-based model to improve the service experience for military families of color through complimentary events, programs and resources. For Bunker Labs, the campaign will support its Entrepreneurship Workshop series, which helps veterans from underrepresented populations, including Black, female, Latinx & Asian American communities, launch and grow their businesses. Since 2013, Macy’s has helped raised more than $13 million for America’s veterans and military families.

Macy’s glittering spectacle is made possible in part by Cracker Barrel Old Country Store®, GoBowling™, Green Giant®, Jennie-O, New York Life, Ram Trucks, and is presented in partnership with the City of New York. Spectators in New York City are encouraged to enjoy the full Macy’s Fireworks experience by tuning in to radio station 1010 WINS (via 1010 WINS-AM, or 1010 WINS on the AUDACY mobile app) to hear the musical score to which the show is choreographed.

For more information on the 45th Annual Macy’s 4th of July Fireworks including behind the scenes content, special mini-documentaries, and more please visit macys.com/fireworks. In addition, follow and participate in the excitement on various social platforms via @macys and #MacysFireworks.

Related Stocks:
Macy's
Data & News supplied by www.cloudquote.io
Stock quotes supplied by Barchart
Quotes delayed at least 20 minutes.
By accessing this page, you agree to the following
Privacy Policy and Terms and Conditions.