TGTE Congratulates Nicola Sturgeon, the leader of the Scottish National Party(SNP) for her impressive electoral victory 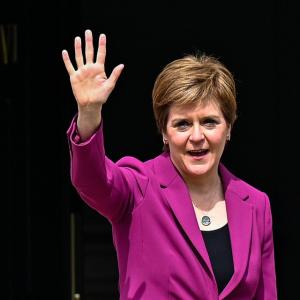 "The TGTE also congratulates the Scottish Green Party for their gains"

The victories of pro-independence parties of Scotland, reflect the aspirations of a growing majority of the Scottish People to decide their political destiny through referendum.”— Transnational Government of Tamil Eelam (TGTE)NEW YORK, UNITED STATES OF AMERICA, May 12, 2021 /EINPresswire.com/ --

The Transnational Government of Tamil Eelam(TGTE) and the Eelam Tamil people congratulate Nicola Sturgeon, the leader of the Scottish National Party(SNP) for her impressive electoral victory. The TGTE also congratulates the Scottish Green Party for their gains.

The victories of the SNP and the Scottish Green Parties, the pro-independence parties of Scotland, reflect the aspirations of a growing majority of the Scottish People to decide their political and fiscal destiny as well as the protection of their national heritage through referendum.

We admire Nicola Sturgeon's leadership in articulating the true aspirations of her people. Her leadership is a model for leaders in countries where People are clamoring for the realization of their inherent right to self-determination and their ability to protect their history, culture, and dignity.

As Honorable Jose' Ramos Horta the 1996 Nobel Peace Prize Laureate and the former President of Democratic Republic of Timor-Leste said, in the 5th annual Mullivaikkal Memorial Lecture (Tamil Genocide) held in 2020, "Ruling Sates have the responsibility to ask themselves why a nation of people such as the Tamils, who have an incredible sense of identity and history, want to be on their own; States also must acknowledge that something must have been going wrong." He spoke of the struggle of the Tamil people in the same vein as the extraordinary demonstrations of the same phenomenon by Catalans in Spain, the Kurds in Turkey and the Scottish in UK by way of current examples.

TGTE firmly believe that it is the fundamental right of the People to choose their rulers as well as to decide the political unit in which they want to live. We hope that the Scottish people will be able to vote in a referendum setting out their future – it is their right and we wish Nicola Sturgeon, the SNP and the Scottish Green Parties, success in their efforts to ensure the Scottish people can exercise their right to self-determination.


ABOUT THE TRANSNATIONAL GOVERNMENT OF TAMIL EELAM (TGTE):

The Transnational Government of Tamil Eelam (TGTE) is a democratically elected Government of over a million strong Tamils (from the island of Sri Lanka) living in several countries around the world.

TGTE was formed after the mass killing of Tamils by the Sri Lankan Government in 2009.

TGTE thrice held internationally supervised elections among Tamils around the world to elect 135 Members of Parliament. It has two chambers of Parliament: The House of Representatives and the Senate and also a Cabinet.

TGTE is leading a campaign to realize the political aspirations of Tamils through peaceful, democratic, and diplomatic means and its Constitution mandates that it should realize its political objectives only through peaceful means. It’s based on the principles of nationhood, homeland and self-determination.

TGTE seeks that the international community hold the perpetrators of war crimes, crimes against humanity, and genocide against the Tamil people to account. TGTE calls for a referendum to decide the political future of Tamils.

The Prime Minister of TGTE is Mr. Visuvanathan Rudrakumaran, a New York based lawyer.