Vancouver, British Columbia--(Newsfile Corp. - November 5, 2020) - Sienna Resources Inc. (TSXV: SIE) (FSE: A1XCQ0) (OTC PINK: SNNAF) (the "Company") Sienna Resources is pleased to announce the commencement of field exploration at the Bleka Gold Project in Norway. The Bleka Vein was discovered in 1880 and mined intermittently until 1940, with historic production reported as 165 kilograms (i.e., ~ 5,300 troy ounces) of gold sourced from mineralized material with an average grade of 36 g/t gold1.  The historic Bleka vein is hosted in a deformed greenstone belt in southern Norway and was formed during two phases of quartz-veining events. Auriferous quartz veins characteristically contain Cu-Bi and tourmaline2. Compilation of historic reports combined with reconnaissance mapping revealed a series of under-explored vein swarms on the Bleka property. Earlier this year, a systematic sampling program to test the vein swarms was initiated to identify gold-rich vein sets. Results were encouraging with over 10% of samples showing anomalous gold results (6 of 52 rockchip samples contained more than 0.1 ppm Au)3.  Historic reports show rock chip samples with similar quantities of anomalous results with some vein samples reaching up to 103 g/t Au4.  As a result of this field work, previously unknown quartz veins were discovered and follow-up soil sampling is currently being conducted in an attempt to identify additional buried quartz veins.

Going forward Sienna has planned more surface sampling coupled with a planned UVA supported magnetic survey which will delineating important structural features to generate  high priority drill targets. Over the coming weeks the historic mine maps will be compiled to create 3D model of the known mineralization and drill planning will commence to test mineralized continuation down plunge and along strike from the existing mine workings.  SIE has not performed sufficient work to verify the published data reported above, but SIE believes this information is considered reliable and relevant. 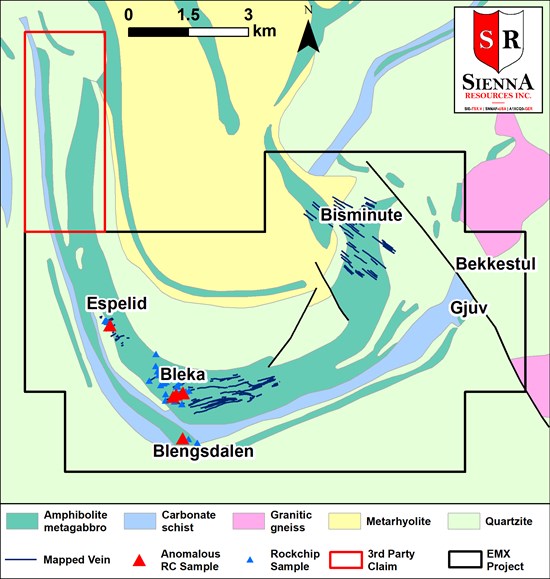 To view an enhanced version of this map, please visit:
https://orders.newsfilecorp.com/files/854/67548_db8fca9c54acebad_002full.jpg

Jason Gigliotti, President of Sienna Resources stated, “We are pleased to continue on the initial success that has been achieved at the Bleka gold project.  We have a methodical, tactical approach to generate the highest priority drill targets in the coming weeks and look forward to what the next phase of work on the property will uncover.  Not only are we active on this exciting gold project, we are also active in Finland and Ontario on our platinum-palladium projects.”

The technical contents of this release were approved by Greg Thomson, PGeo, a qualified person as defined by National Instrument 43-101.

Sienna Resources Inc. is focused on exploring for and developing high-grade deposits in politically stable, environmentally responsible and ethical mining jurisdictions. Sienna is partnered with an NYSE listed mining company on three separate projects in Scandinavia including the past-producing Bleka & Vekselmyr Orogenic Gold Projects in Southern Norway which are both greenstone-hosted gold systems, the Kuusamo platinum group elements (PGE) project in Finland directly bordering the LK Project being advanced by Palladium One Mining Inc. (PDM-TSX.v), and the Platinum-Palladium-Nickel Slättberg Project in Southern Sweden. In North America, Sienna’s projects include the Marathon North Platinum-Palladium Property in Northern Ontario directly bordering Generation Mining Ltd.’s (CSE: GENM) 7.1-million-ounce palladium-equivalent Marathon Deposit. Sienna also has the Clayton Valley Deep Basin Lithium Project in Clayton Valley, Nevada, home to the only lithium brine basin in production in North America, in the direct vicinity of Albemarle Corp’s (NYSE: ALB) Silver Peak deposit and Tesla Motors Inc.’s (Nasdaq: TSLA) Gigafactory. Management cautions that past results or discoveries on properties in proximity to Sienna may not necessarily be indicative to the presence of mineralization on the Company's properties.

To view the source version of this press release, please visit https://www.newsfilecorp.com/release/67548